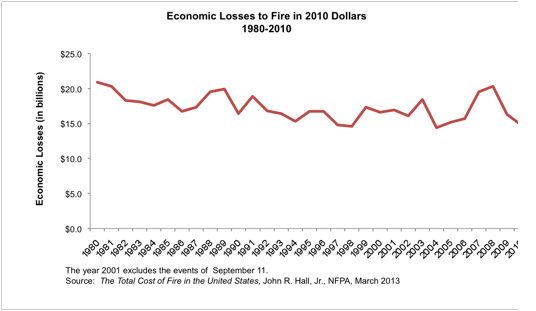 Help Decision-Makers Understand the Direct and Indirect Cost of Fire

The Direct Cost of Fire

The impact of fire on the economy goes well beyond the more than $11.7 billion in direct property damage.* The National Fire Protection Association (NFPA) estimates that in 2008, economic losses to fire (direct and indirect, reported and unreported) totaled $20.1 billion. NFPA also estimates that in 2008, the total cost of fire was $362 billion, or 2.5 percent of United States gross domestic product (GDP).

Text version of chart of average loss per structure fire

The Medical Cost of Fire

In 2010, there were more than 390,000 emergency department visits in the United States to treat burn injuries.**

The Social Cost of Fire
You have seen how fires devastate lives. Use your personal knowledge to show your community that even when there are no injuries or deaths it can take years to recover from a fire. The loss of a home, possessions and family treasures can haunt people, particularly children, for the rest of their lives.

Show how entire communities suffer when fires occur in businesses, places of worship or schools, not just from the loss of services but also the effort to rebuild or replace them. Resources that could be used to improve communities must instead be used to restore them.

What if prevention gets cut? “There are many aspects of prevention where you won’t see the impact of lost prevention overnight, but you are highly likely to see increased losses over the subsequent years that far overshadow the dollars saved by cutting prevention. Prevention has tremendous leverage in saving money and lives. How many times do we have to prove that?” says Phil Schaenman, founder and president of TriData, a research firm headquartered in Arlington, Virginia. “When funding is cut for a fire department’s inspection program for example, building managers and occupants start taking shortcuts when they realize the inspections aren’t going to occur regularly, or when they forget and are not reminded of what they should do. Hazards that would have been discovered remain in place, including real dangers such as propped open fire doors.”

Lessons learned from the deadly 1991 Imperial Foods chicken processing plant fire in Hamlet, North Carolina, included the finding of locked exit doors. According to the United States Fire Administration technical report, “The blatant problem of having exit doors locked on a continuous basis is clearly one that must be addressed by enforcement officials. Enforcement is as essential as the code requirements themselves.”